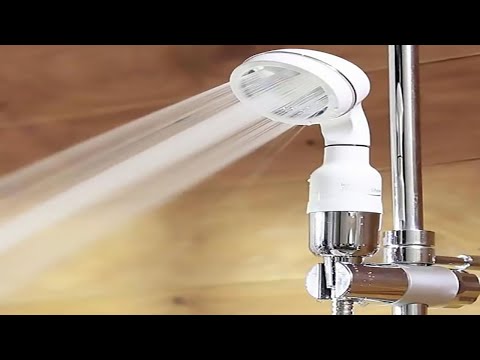 The new therapeutic shower water filters feature superb advantages as the shower has been modified in a scientific way to produce the best shower filter for the shower that leaves its therapeutic benefits on the hair and skin and offers more comfortable and luxurious options than the traditional shower that brings ordinary unfiltered water.

The medicated shower filters characterized by two filters, the first located behind the water outlet holes removes dust, rust and impurities, resulting pure water free of pollutants. The second filter is a small pack that works on isolating chlorine completely from the water and adds vitamin C and collagen in addition to Melaleuca oil and a boost of negative ions, all of these materials are well-known for their benefits for hair, skin and health in general, so shower filters are the best shower filters.

Cons of chlorine in water

There is a big amount of chlorine in ordinary water which has a negative effect on hair and skin when taking a shower, as chlorine increases hair coarseness, brittleness, and reduces its flexibility. It also has an effect on the skin as it may reduce its hydration and cause dryness and sometimes allergies and itching. Along with that some people may have respiratory problems due to the strong smell of chlorine.

The medicated shower filters offer many benefits, thanks to the treatment package added to it, which offers the latest shower water filter technology to be the best shower filter for showering as you'll get the following benefits:

Are there different scents in the hair shower filter?

Yes, a collection of different scents is available for shower filter as lemon, lavender, and vanilla, adding to the body a fragrant scent.

Do filters need to be changed constantly?

There are two filters in the medicated shower, the first for impurities, which must be replaced every 4 months, while the medicated filter should replace every year.

How do shower filters help save water?

The filters save water consumption by 50% in addition to increasing the water thrust by 40%.

business needs as quickly as possible.
We have all spare parts to meet the customer's need for after-sales service.
We also have annual maintenance contracts for residential and commercial buildings for all equipment and water appliances.